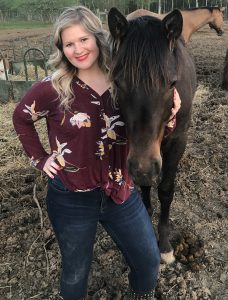 Courtney Losey grew up following in her mom’s (Becky Payne’s) footsteps, with a passion for animals and for helping people.

She began undergraduate studies at UW-River Falls with a major in Animal Science/Pre-Veterinarian Medicine, but after working at Nature’s Edge and shadowing Becky Payne, she fell in love with Speech-Language Pathology. She received her Bachelor of Science degree in May 2015, majoring in Communication Sciences and Disorders.

After graduation, she worked as a Speech-Language Pathology Assistant at the Chetek-Weyerhaeuser Area School District for the 2015-2016 school year, returning to Nature’s Edge for the summer months. During the 2016-2017 school year, she was a lead teacher at the Chetek Kids’ Club and again worked at Nature’s Edge Therapy Center in the summer as a Speech Therapy Assistant. She has recently completed her graduate work at Nova Southeastern University, earning her Master’s Degree in Speech-Language Pathology and continues her work at Nature’s Edge.

Courtney is a 4-H horse leader, is PATH-certified, and is excited to progress in her knowledge of hippotherapy through AHA. Courtney and her husband Chance live in Cameron, WI with their 7 pets (3 horses, 2 dogs, and 2 cats). Courtney enjoys milking cows (part-time job), running, riding horses, and spending time with her family and pets.